Another Historical Sew Monthly challenge finished well ahead of schedule! It's just so much easier with fabric from the shop and a sewing machine. Unfortunately, writing a blog post takes just as long time as usual, but I did manage to get it up before the end of the month!

The February challenge is 'Tucks & Pleats', which equals another opportunity for me to venture into 20th century dress making. I thought I'd start with something simple: a mid-to-late 1920s drop-waist dress. As it happened, I was going to make one anyway – a couple of friends and I were going to the nightclub-party-event-thing Party like Gatsby when it came to Gothenburg on January 23. As usual, I was more interested in making the clothes, learning about finger waves, makeup and fancy powder compacts than actually going to the party...so when it turned out I had to spend the entire weekend in front of the computer preparing two full-day lectures instead, I wasn't too upset. Well, I was, but it could have been worse. Anyway, here's the story of the outfit:

I felt that it was a good idea to start with the underwear. I have both a vintage (late) 1930s bra and a girdle with suspenders, but although similar styles do appear towards the end of the 20s I thought they were a bit too modern and decided to make new ones. I looked at pictures of original underwear, especially from mail order catalogues of the time, and opted for a simple bra with a few darts to give it some shape and an equally simple suspender belt (the knickers/underpants would have to wait). Truth be told, I probably aimed more for a 30s style with the bra in the end, since that would be more useful to me... I draped my mock-ups straight onto my dress form with a thin but sturdy cotton fabric, tried them on and made some adjustments and that was it. I had made my very own made-to-measure underwear and I even ended up using the mock-up as the real thing. The bra was just as comfortable as the ones I wear every day. I'm still a bit surprised at how well it went; I still need to work on my machine sewing and finishing techniques, but the patterns were pretty much perfect!

I spent a full day shopping for fabric for the rest of my outfit (interspersed with long discussions over coffee with a friend). Since it was going to be a party dress, I wanted silk, pure silk. Eventually I settled for a pale pink habotai for the underdress and a striking pink, slightly stiff Indian silk for the overdress. To top things off, I brought out a piece of vintage net with golden threads and glass beads from my stash for that extra touch of fanciness.

Spurred on by the success of my self-made bra and suspender belt, I went fully DIY for the dress pattern too. But first I Pinterested my way through lots and lots of pictures of original dresses and tried to recall all the lovely 20s outfits my colleague and I had spent months packing when the museum I work at moved two years ago. With this page from La Mode du Jour as inspiration for gathered sides and this helpful sewing tip for vertical pleats I set about draping my dress form again.

Things were going so well, it was about time that something happened to halt my easy progress. And it did. My lovely bright pink silk decided to produce a veritable blood bath when I washed it (I always prewash; I want to know how the fabric behaves when it's off the shelf and introduced to the real world. And my real world includes washing). There was so much excess dye in it that the water was still strawberry red after 3 washes. I got worried the colour would continue to run just from getting damp... At least there was no discernible change in colour on the actual fabric, which was a good thing. But as it dried, I got another surprise. Apparently, it was one of those Indian silks of the handwoven type where high-twist threads are used seemingly at random throughout the fabric. They're invisible as long as the cloth is left well alone, but come alive if it's washed... I now had an uneven, scrunchy mess of a fabric and not the slick and shiny silk I wanted for my dress. I went over it with the iron, which made it look sort of alright, but it was clear this fabric would have to go into the stash pile and wait for a more suitable project.

The following day, I ran off to the fabric shop to get a substitute, but couldn't find a single bolt of silk that would work. Eventually I found a red wool/viscose crepe. It was a great fabric with beautiful drape, but not the fancy silk I had envisioned for my party dress... However, I was low on time and money by now and it would just have to do. I'm not sure how common a wool/viscose blend would have been in the mid-20s. Viscose was certainly around in the twenties, but as far as I know, in the early days it was almost exclusively used in the form of filaments, mimicking the look and feel of silk. Using it as a staple fibre (i.e. cut to look like cotton or wool) came later (but I will really have to look into this more thoroughly to get my materials right now that I've moved into modern times!). Anyway, since the viscose in my fabric actually appeared to be used to add a subtle silk-like sparkle to the wool, and not as a wool substitute, I figured it was kind of alright.

Back on track with the new fabric, I quickly finished the under- and overdress, adding a vintage velvet ribbon as a fake belt to the overdress. At the time, I still thought I was going to the party and as a last minute attempt to make it a little less like a daydress I decided to do a bit of embroidery. I copied the design from a very fancy vintage 20s dress I stumbled upon online, toned it down a little and stitched like mad to finish it in time.

On the morning of January 23, the day of the party, I had a very presentable dress with 1/3 of the embroidery in place, but realised I would have to spend the weekend preparing lectures rather than dancing the Charleston. I consoled myself with posing for a couple of pictures in the dress, wearing my vintage spectacles and reproduction shoes from American Duchess.

I then spent the whole of the challenge month of February finishing the embroidery at a very leisurely pace. All I have left to do now is attaching it to the dress...

Year: Mid-1920s, moving towards the end of the decade.

How historically accurate is it? Pretty accurate, although my French seams (on the underdress in particular) are a lot wider than those on original pieces (I'm still learning to handle a sewing machine...). I'm a little uncertain about the wool/viscose blend.

Hours to complete: I never manage to keep track of time when it's not work...

First worn: For the pictures

Total cost: Approximately $77 / €70 for the fabrics; everything else came from my stash. 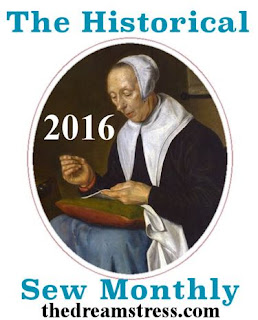