Got wool, will spin

After taking part in the first Textilforum meeting in Eindhoven last September and the spinning experiment carried out there, I just couldn't stop spinning (with a spindle, that is). I've expanded my collection of spindles and spindle whorls and got myself a pair of wool combs: 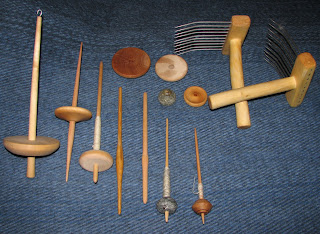 I've practised, practised, practised and now I think it's finally time to launch my Slightly Insane Wool Project: I'm going comb, card and spin wool into three types of thread (for warp, weft and sewing), weave my own fabric, possibly dye it and full it, and make some sort of handsewn garment out of it. It'll challenge both my craft skills and my patience, but I think it's going to be a lot of fun!

I got three fleeces from local sheep farmer Ingela på Ljungås who breeds a Swedish landrace sheep called Värmlandsfår - Värmland sheep. It's a double-coated breed with both short/fine and long/coarse fibres combined in the same fleece.

Last weekend I sorted and washed all the wool. I rinsed it three times in lukewarm water to the remove the dirt and some - but not all - of the lanolin. It took the better part of two days to finish the washing and four days for the wool to dry. Every empty surface in our flat was filled with wool that grew increasingly fluffy as it dried... 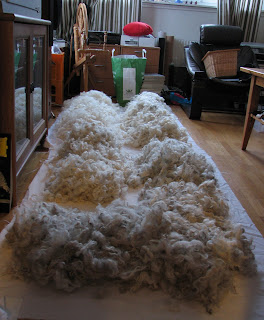 This week I've done a little combing and test spinning to try out the spindles/whorls. I've never really spun properly worsted thread before, using only the long, shiny guard hairs of the outercoat. I need a little more practice to get a consistent twist, but I'll be able to produce a perfectly usable wool sewing thread any day now, both thin and strong!

The image below shows what the wool looks like before and after combing - the wool locks to the right are separated into fluffy rolags for spinning woollen thread and tops for worsted. 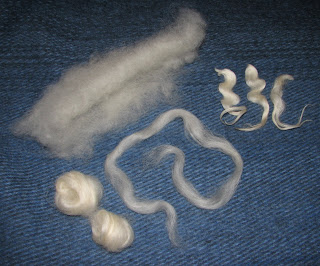