A Couple of Excuses and An Early 20th Century Skirt

This past year hasn't been a particularly creative one, textile-wise. Or blog-wise for that matter. I simply haven't had the time or energy to create anything original or produce something worth posting about. The Slightly Insane Wool Project ground to a halt as I got more and more particular about the thread I spun. I went back to practising with pre-prepared, store-bought Shetland tops.

It wasn't until the Easter holidays last week that I actually started working with the wool I washed in the last post over a year ago! I practised longdraw drafting on my spinning wheel for two hours on Easter Monday and the result was...well, take a look at the lovely Ruth MacGregor spinning on YouTube and you'll know what my attempts did not look like... But at least I'm back in the game now, sort of.

So far, the things I've put on this blog have had something to do with medieval textiles/clothing, or the re-creation thereof. Lately, I've mostly done things like quite modern knitting and crocheting - very much for recreational purposes, but in the non-hyphenated sense of the word. Nothing even remotely traditional, medieval or even historical. And therefore, no posts.

But I've been thinking, why limit myself to medieval textiles? I work in a museum with huge modern textile collections (huge on a non-V&A-kind-of-scale. And modern in this case means post-1800), so most of my professional life is spent dealing with modern stuff.

Earlier this year, the museum received a dress from around 1880 which I got to register in the museum catalogue. It wasn't one of those fancy late 19th century silk dresses worn by the well-to-do, which museums are so fond of putting on display - it was a reasonably simple woollen dress. Fashionable and well-made, but simple. It piqued my interest. So rather than just adding it to the catalogue, I took the opportunity to measure it thoroughly and draft a pattern of it. The next step is of course to try to make one for myself (there I go again - re-creating...). My theoretical knowledge of drafting patterns for modern clothes (the 1800s qualifies as modern for me) is non-existant, so I have no idea if my pattern will work or if I will ever be able to adjust it to fit me. But I like a challenge. And I might even make a proper post about it later!

Anyway, working with the 19th century dress got me looking into more recent fashions, slowly dragging me out of the 14th century. Now I've read up on 17th - early 20th century clothing and tailoring techniques, immersed myself into the surprisingly fascinating world of the so-called "Västgötaknallarna"**, along with the early cottage industry and well-developed putting-out system for producing cloth in this region. And as a result of my new-found interest in post-medieval things, I made an amazing find at a second-hand shop about a month ago: 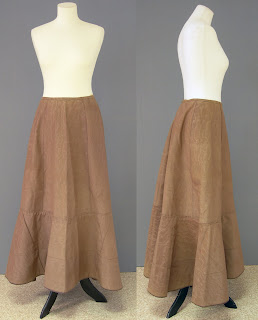 Front- and side-view
An original early 20th century skirt! My guesstimate is that it's from around 1900-05, possibly a little earlier. As far as I can tell, it has never even been worn. The price was ridiculous: 105,00 SEK (that's less than 10 euros). And although it was made for someone a little thinner and shorter than me, I can actually wear it! 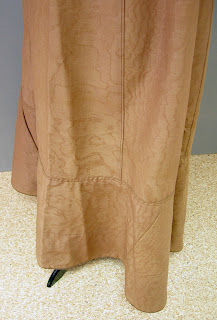 A turn-of-the-century wool moire!
It's made of a stunningly beautiful moire fabric of pure wool. It's really stiff and the reverse side is flat and shiny from the hot calendering that produced the moire pattern on the right side. The lower part of the skirt is lined with a rather coarse cotton cloth for protection and it's edged with a narrow woven band with a stiff fringe like a brush. I call these bands "dust-gatherers", but they probably have a proper name too. 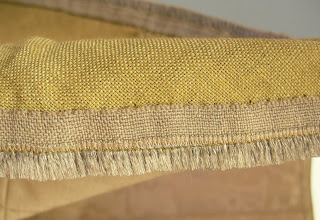 Close-up of the "dust-gatherer".
(if you know the proper name for this type of band, please let me know!)
The skirt is cut with a slight flare from the waist across the hips to a little below the knees, where the sewn-on lower part flares out a little more. It's made up of several pieces put together in a rather interesting way - you can see two of the seams running diagonally across the front if you take a closer look at the first photo.

Back-view
The skirt is only a few centimetres longer in the back, so there is no train to speak of. Unfortunately, it didn't come with a jacket - I looked through the entire second-hand shop twice in the vain hope of finding one. So if I want to wear the skirt, I'll have to fake an Edwardian blouse to go along with it. I'm not sure I could bring myself to wear it, though; the museum curator in me sort of rebels against the idea of wearing a 100-year-old garment... I suppose I'll have to make a copy of this one as well. Yep. Re-creation as recreation.


**18th-19th century itinerant peddlars from the area around Borås where the museum I work in is situated. They travelled widely and were famous for selling locally made (and sometimes also illegally imported) fabrics.
Posted by Arachne at Tuesday, April 26, 2011 5 comments: