Since my weaving is going very well I decided to turn my attention to the paper I have to write instead. I spent the better part of the day fiddling with the introduction and then tried to write the background instead. I seemed to have forgotten everything I had ever read on the subject of medieval girdles and had to sit down with the books again and take new notes. This also meant I had to re-translate the relevant parts of Ilse Fingerlin's book Gürtel des hohen und späten Mittelalters because I had no idea what they said anymore despite having read them all a month ago. It's very annoying, but I suppose that's what stress does to you...

I don't know any German, but luckily my native Swedish is similar enough to make reading it possible with the help of a dictionary and a lot of patience. Fingerlin has some interesting discussions concerning the dating of Eric of Pomerania's belt - she pushes it back to the 13th century, wheras Poul Nørlund and the National Museum of Denmark say it's 14th century (all of them agree that attributing it to Eric of Pomerania is completely wrong, though. But the name still sticks...).

Hopefully I'll manage to write something tomorrow instead. I have a meeting with my supervisor on Monday and it would be nice to have something written to show her, but it's a real struggle to write in English again. I haven't done it in years, but I thought it would be a good idea now since there's a lot of non-Swedish speaking people out there who might find my thesis interesting...

...perhaps not perfect, but at least a whole lot better!

I changed the pattern for the gold thread (there's hardly anything left of it on the original belt, so I had to improvise a little) and started all over again with my sample piece. I have to show it in the graduation exhibition organised by the school, so I decided I needed something that can be displayed without having to cover up the first couple of centimetres of uneven picks...

And I'm much happier with this second piece - the "gold" thread looks a lot better and the proportions are closer to the original. I wove it in half the time it took me to do the first one too, so yay for me!

Here's a picture of the new and improved sample! 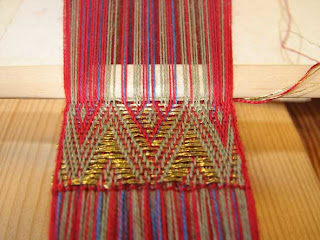 So many threads, so little time...

My first full-scale trial piece of the "Eric of Pomerania's Belt"-weave is progressing slowly and I'm reasonably happy with it. The cheap spun silk I'm using as a substitute for the more appropriate reeled silk is a bit fuzzy and the fake gold thread doesn't cover the background very well, but otherwise it's working. I had a hard time pulling the weft tight enough to get the band down to the correct width today (approximately 3 cm). There are over 100 threads/cm and although the edges are nice and tight, the threads in the middle still look a little too spaced-out. But they do that in the original too, so maybe I shouldn't worry about it...

Here's a close-up of today's work. Remember it's only 3 cm wide! 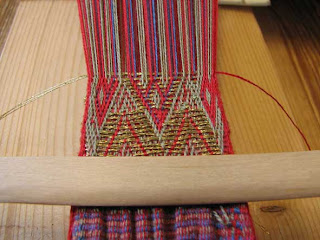 I'm analysing the so-called "Eric of Pomerania's Belt" kept at the National Museum of Denmark for my bachelor's degree in handweaing. It's an extremely well-preserved silk girdle dated to the 14th century with a very complex weave. It's wonderful, fascinating work and I should be loving every minute of it. And I am. It's just that it's also incredibly slow work and I only have one month left before everything has to be finished..

The archaeologist in me wants to do a proper report with lots of background research and comparative material, but the powers that be at the University College of Borås where I study are more into textile design and product development so I'm worried that an archaeological/historical type of thesis like mine will meet with puzzled incomprehension. I won't have a designed product or a textile artwork at the end of this like my classmates; I will have a tiny woven sample the size of a bookmark if I'm lucky and spend my nights weaving instead of sleeping! I just hope I'll be able to make them see all the work behind it... Just figuring out the weave took me almost a month and several weaving experiments!
Posted by Arachne at Tuesday, April 17, 2007 No comments:

Hmm... Never done this before, but it seems to be a good way to keep an easy-to-update page to store thoughts and post things on the net. It's worth a try!
Posted by Arachne at Monday, April 16, 2007 No comments: