After some internal debate ('I don't need more things to sew. Or time constraints!' -'Yes, you do. Besides the Facebook group is really nice with lots of interesting stuff and knowledge going on there.'), I joined the The Historical Sew Fortnightly a couple of weeks ago.

I had already finished the first challenge by then (Make Do and Mend), because I had first decided to just tag along in secret this year and do the challenges I felt like doing. Which is kind of stupid, since that's pretty much the prerequisite for actally taking part, and I'd just miss out on the sharing-your-work-with-others-bit. However, I felt it was a bit late to post the first challenge when I joined, so I've decided to lump it together with challenge #4: Under It All in this post (I had really intended to do challenge #3: Pink, too, but failed to even start on the mock-up for the pattern...). So here goes:

The Historical Sew Fortnightly Challenge #1: Make Do and Mend
An apron for the late 14th century.
I've used the same old apron for years and years and it's one of the first handsewn things I made, before I even started making historical clothing. I've used it for everything from LARPing to protecting my ordinary clothes while sorting and preparing dirty wool for spinning. The stitching was kind of clumsy and the piecing on the waistband with a seam ending up centre front annoyed me. My first attempt at rolled hems wasn't exactly a success either. So after 12 years of use, I thought it was finally time to redo my apron. I removed the waistband and re-did the piecing. I cut off the fraying rolled hems, folded the edges and sewed them down with overcast stitches instead. Instead of the deep knife pleats I'd used on the top edge of the apron, I simply gathered it to the waistband which I stitched on with small stab stitches.

It's a linen apron of a type that can be seen in pictorial sources from the early 14th century and onwards. Sometimes, contemporary images seem to depict aprons with smocking, but since they are amply represented within the 14th century reenactment community as it is, I chose to keep mine simple and more suitable for my social standing.
The Challenge: #1: Make Do & Mend
Fabric: Linen (it used to be unbleached, but now almost white...)
Pattern: None
Year: 14th century
Notions: Linen thread
How historically accurate is it? It's handsewn with waxed linen thread and the materials are correct (but not handspun or handwoven, though). No medieval aprons have survived to this day, but it's based on contemporary pictorial sources, so it's almost as accurate as it's possible to get.
Hours to complete: approximately 3 hours
First worn: The day after it was finished (mid-January 2014) when washing wool in the bath tub.
Total cost: All the fabric came from the original apron, the sewing thread from my stash, so it didn't cost anything.

The Historical Sew Fortnightly Challenge #4: Under It All
A supportive linen undergarment
The Challenge: #4: Under It All
Fabric: Unbleached linen
Pattern: Self made.
Year: 14th century
Notions: Linen thread, some hemp string for lacing it up
How historically accurate is it? It's handsewn with waxed linen thread and the materials and sewing techniques are historically accurate (nothing handspun and handwoven, though). No supportive shifts have survived from the 14th century, but written sources mention some sort of supportive undergarment with 'bags' for the breasts in the 14th century (the now-famous underwear from Lengberg Castle in Austria are too late for me, being from the late 15th century). I've simply taken a page from Isis Sturtewagen's book (or rather her blog Medieval Silkwork!) and defer to her research and the 'bra-shirt' she made, based on a c.1360 statue from Münster zum Heiligen Kreuz in Schwäbisch Gmünd, Germany.
To sum things up: It's a 'plausibly medieval' garment, the look of which is based on a single medieval depiction.
Hours to complete: approximately 12 hours, with an additional 3-4 hours for fitting the body block used as a base for the supportive upper part.
First worn: During Albrechts Bössor's annual winter march on February 15, but it wasn't quite finished at the time. I added a couple of lacing holes and hemmed it afterwards.
Total cost: All materials came from my stash, so it didn't cost anything.

In the pictures below, it's worn under my blue woollen dress (without the apron). The woollen dress is tight, but not supportive. It's pulled on over the head and wriggled into - so the supportive underdress really helps to give me the somewhat 'pushed-up' late 14th century look. To make sure the fabric of the overdress would be nice and smooth in the chest area, I put the lacing of the underdress in the side seam. 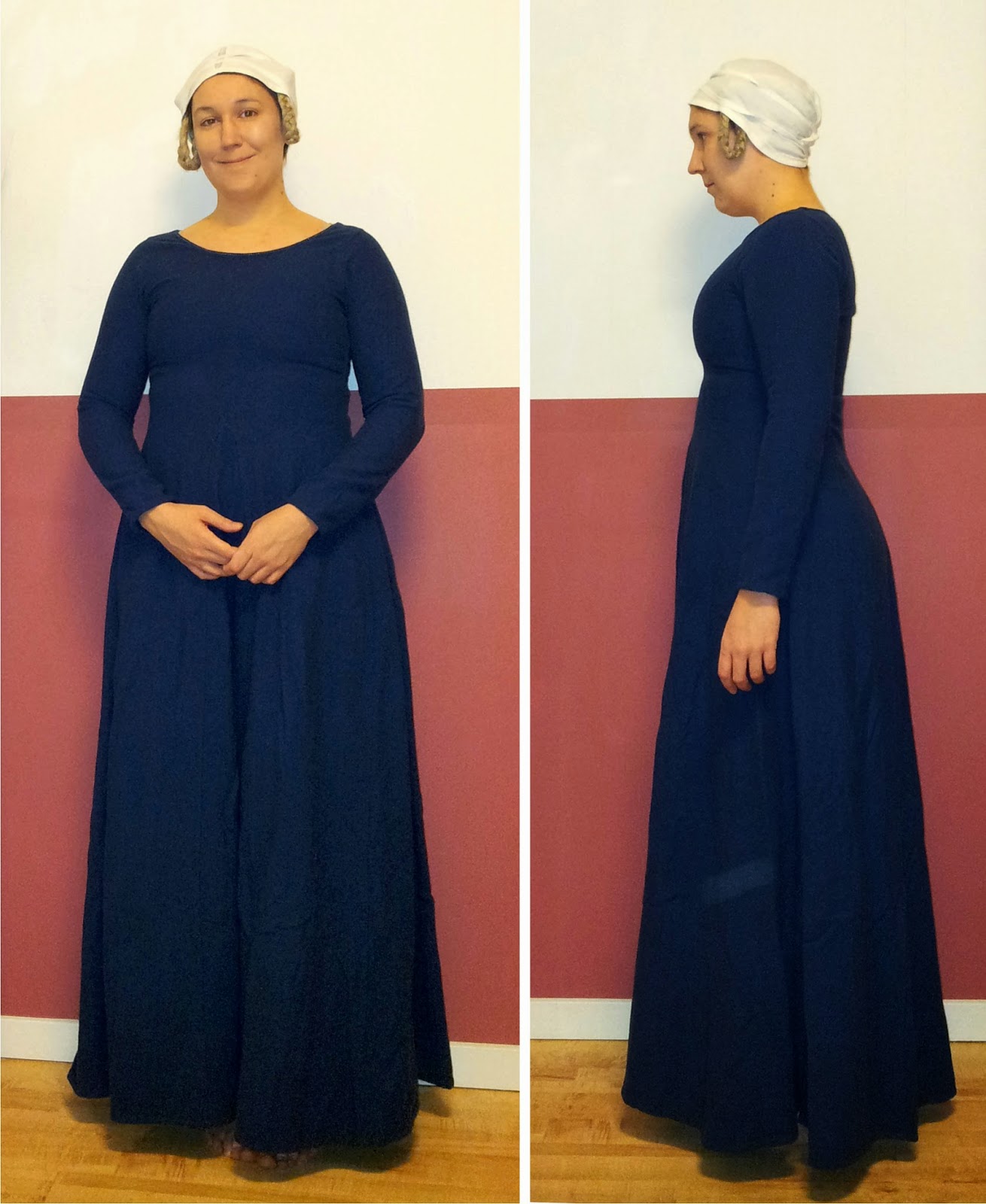