I commute to work so a lot of my craft-related stuff gets done on trains and buses. I knit, crochet and sew things; I do naalbinding and embroidery. Regrettably, I've had to leave my tablet weaving at home, because I haven't been able to find a portable loom that works for me. Backstrapping is not an option since I don't like being tied to my work and it doesn't suit my style of weaving anyway. I already have two inkle-style looms made after Toli's design, but they are too large and heavy to take with me on public transport...and impractical as I usually don't use a continuous warp. They are also conspicuously modern and I would like something that looks at least slightly historical. So a couple of weeks ago, I finally started looking around for sources and inspiration for constructing a portable tablet weaving loom of my own.
Medieval sources for tablet weaving looms are usually limited to contemporary illustrations which typically show the warp tied between two upright post, sometimes connected with a crossbar, as in these images: 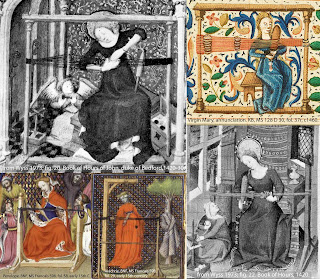 I already have one of these posts-and-crossbar-looms, which I like a lot, especially for complicated work. But it certainly isn't portable enough to use on a bus! 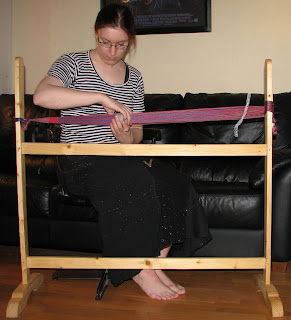 There are also images of box looms, but they seem to be associated with rigid heddles or tapestry weaving rather than tablets: 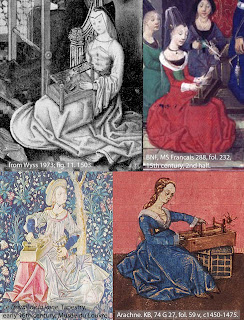 (I'm not sure it's a loom in the top right image. It looks more like a bobbin winder to me, but it's small and box-like so I included it anyway...)

Looking at the more recent history of the box loom, it seems that Norway is the home of handy weaving contraptions. A quick search in Norsk Folkemuseum's collections came up with these 19th (?) century treasures: 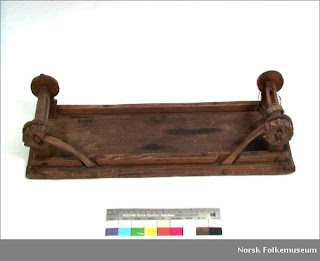 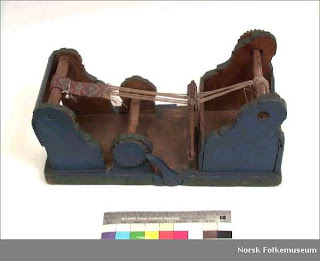 For more of these wonderful little looms, go to http://primusweb.no/ and search for "båndvev"! You'll get a few pages of rigid heddles and weaving tablets as a bonus if you do!
Going back to the medieval illuminations, there's also this mystery loom: 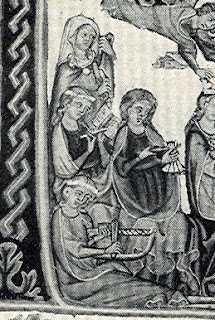 It surfaced about three years ago on the SCA Cardweaving-list at Yahoogroups, but no one ever found the reference for the manuscript it's taken from (as far as I know). The image comes from a German book (see reference below) and appears to be an ad for a forthcoming publication about illuminated Gothic books (it's a "Probebild aus dem für 1932 in Vorbereitung befindlichen Band Gotische Buchmalerei". The bow-shaped object certainly seems to be used for tablet weaving - the woman holds her hand in a proper tablet-turning position and is using the beater like a pro! - but the actual design of the loom is left pretty much to the imagination.

Except for this "bow loom", there doesn't seem to be a whole lot of visual evidence for small and portable medieval tablet looms. But I still need one. So, giving up most pretenses of making something that's actually historically accurate, I've settled for a solution that I believe will work for me - a generic-looking box loom with a twist. I hardly ever work on only one project at a time and want to be able to change warps quickly and easily in mid-project - a procedure that doesn't work very well with box-loom roller beams... So I've decided to have "double" guide beams on my loom, mounted on top of each other in vertical slots in the sides of the loom. This allows them to move apart a little so they can be used to lock the band/warp in place without using the roller beams. I made this prototype to test that there wouldn't be any slippage: 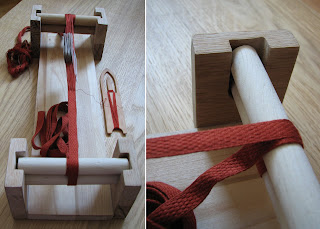 It's not pretty, but it works perfectly, even with a slippery silk warp!
I used wooden toilet paper holders for the sides and a spice rack for the bottom part - unofficially I call it the "bog loom" (short for "bog roll holder loom"...) ;-p! It works fine as it is, but I want a nicer-looking, slightly larger version with roller beams too, one that I can use as an ordinary loom as well as for tablet weaving. My woodworking skills are virtually non-existent so I need to get someone to help be with this... In the meantime, I'll make do with my prototype and weave my way to work and back again!
(btw, I've sent in the proofs for my NESAT X article about Eric of Pomerania's Belt now, so hopefully it will be in print soon! And I will give a presentation about the belt at Medeltidsveckan in Visby, Gotland - see this link for more info in Swedish).